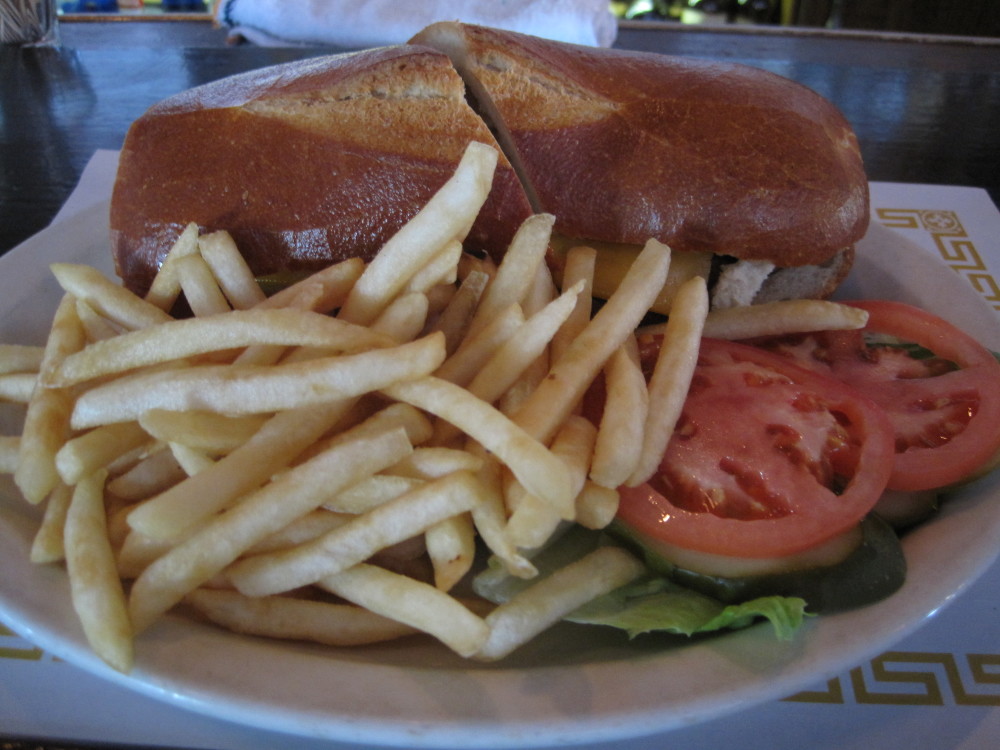 Double Play is really close to where I live. This is where I go when I need some greasy food to cure a hangover. The food is good, cheap and just what I need for a spinning head and hungry belly. I’ve had the burger many times, but of course the time I go for an official review I am horribly let down.

I didn’t realize that you had two choices for your burger bun: “French roll or bun”. Because I didn’t notice this on the menu the bartender chose for me, and she chose wrong. I ended up with a sourdough bun, and I HATE sourdough. (You might also note that the menu didn’t say sourdough either, so I wouldn’t have known either way.)

Now you might say that isn’t fair, how can I hold this against them and their burger? Well, aside from the bun, the burger just wasn’t doing it for me like it had in the past. It just wasn’t the magical piece of tasty messy meat that I remembered and it wasn’t cooked medium like I ordered. Come to think of it, I wasn’t hungover for the review and maybe the haze of hangover really skewed my past judgment. Well that’s just too bad. Until I go in there for another hangover burger, the rating is just going to have to stand at three stars.

Also, the fries suck. But its a great day-time dive bar.

If you’d like to try Double Play, here’s a 50% off voucher from Mobile Spinach. Even though I didn’t like the burger that much, they do have great hangover food (as mentioned) and its a great bar for watching the game (whatever game that may be). I have lunch here just about every other weekend. (The voucher is only available for 4 weeks on iPhone, iPad, Android and Blackberry Torch; Google Chrome, Safari and Firefox 4.0).